The Raspberry Pi 4 (What is a Raspberry Pi?) is a very popular hardware for a home server. It comes with the essentials and is powerful enough for many use cases in small networks. Where Raspberry OS (or formerly Raspbian) was the standard operating system in the past, now the Linux Ubuntu operating system is a good alternative.

Raspberry Pi 4 as a Home Server

In a home server situation we assume that the server has to run all year long and around the clock (24/7). The Raspberry Pi is as a small server in smaller home networks a good choice as it comes with enough power for many server use cases and a comparatively low power consumption (Some smart guys have calculated a consumption of approximately 41 kWh per year running 24/7 whereas a small Desktop computer was identified with a power consumption of around 543 kWh).

In earlier installations we used the Linux operating system Raspberry OS (or formerly Raspbian), but now run it with the Linux Ubuntu Server 21.10 in 64 bit version. 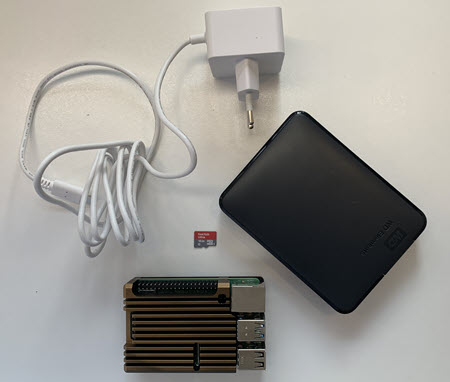 The Ubuntu Server Operating System for the Raspberry Pi

The Ubuntu operating system is available as an option in the Raspberry Pi Imager tool.

In the Raspberry Pi Imager several Ubuntu versions are available, for our home server on a Raspberry Pi 4 (!) we go for the Ubuntu Server 64 bit version.

(This quote is from the Ubuntu web site at: Install Ubuntu on a Raspberry Pi | Ubuntu)

Regular or LTS - what's the best option for a home server?

Within the support phase of a release (i.e. 9 months for a regular release, 5 years for the LTS), Ubuntu packages are only updated to

When you go for the regular version you can get the latest packaged software versions and improvements every 6 months, but you also have to update your home server after 9 months latest, because you do not want to run a home server with an out of maintenance operating system.

When you go for the LTS version instead, it will receive security fixes and selected bug fixes only, as explained above. You can stay on this release for up to 5 years (calculated from the date when the LTS release was published).

For many, the LTS option is the better choice for their home server. They may not need the latest software features and are good to go with the packaged versions for a few years. And once the next LTS major release becomes available in its 2-year-frequency, they can update when convenient without having the pressure to do a full release upgrade every 9 months latest if they would be on a regular release.

How to install Ubuntu Server on your Raspberry Pi

There is a good tutorial available on the Ubuntu website that explains the steps: How to install Ubuntu Server on your Raspberry Pi | Ubuntu

Having said that, you would like to consider a couple of additional aspects for a Home Server installation:

For the setup we need:

If everything goes as per plan, we do not need a monitor, keyboard, or mouse for the Raspberry Pi because we want to run the home server headless.

We want to install the latest available (which may be more current than that what you can see on this screenshot) Ubuntu server 64 bit (either regular release or LTS, whatever you prefer). To prepare the SD card follow the steps as explained in the Ubuntu tutorial. 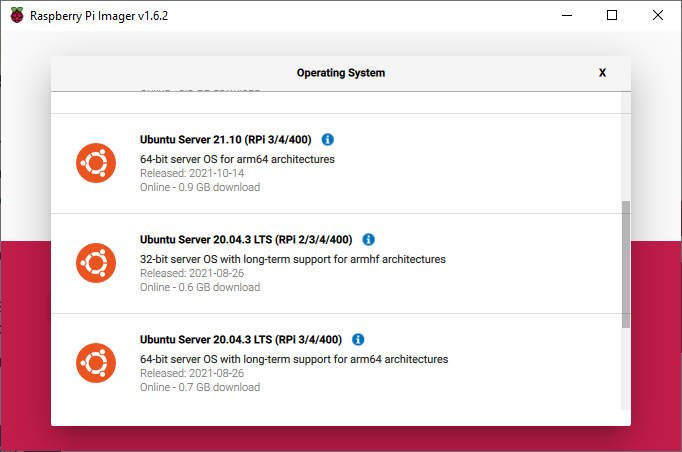 We would like to connect the Home Server directly to our home network with Ethernet (i.e. cable, not WiFi) and assign a stable IP address within the home network.

Before the next step, identify an appropriate home server internal IP address that can be assigned directly to the home server. Make sure, that this address is not in use by any other device and is not from the pool of IP addresses your DHCP may assign automatically.

To configure Ethernet with a static IP address, follow the steps explained in the tutorial under Getting setup with Wi-Fi because we need to make changes to the network-config file. Relevant for us is not the section for wifis: but ethernets: to set a static IP.

To set a static IP you need to replace the

line in the network-config file with lines that specify the intended IP address as well as its default gateway and DNS server. You can do this for either the eth0 or wlan0 interface (or both), but as since we want to configure the Ethernet connection, we only change the entry for eth0:

It is important that you get the indenting right for this work correctly!

Before you connect your Raspberry Pi to the power supply, make sure that the Ethernet network cable with a connection to your home network is plugged into the Raspberry Pi.

Follow the steps explained in "Boot Ubuntu Server" of the tutorial.

Since we run the Raspberry Pi headless, i.e. without any monitor or keyboard, it is handy that the SSH server is activated on Ubuntu already. It may take 2-3 minutes before the Pi is ready, so wait a moment before you try to connect with your SSH client.

To access the your server using SSH, you need an SSH client. For access from a Windows system, PuTTY is a good option: PuTTY - Telnet and SSH Client for Windows

The server IP address you enter into your SSH client is the one configured for the Pi; in our example as per above it is 192.168.1.10.

The user for login is ubuntu and the initial password ubuntu

The password needs to be changed immediately after the first login, then Ubuntu does a logout and you need to re-login with the new credentials.

Update all Packages to the Latest Version

Next, you want to update all packages to the latest version. Enter on the command line:

The update may take some time, let's say around 15-30 minutes.

Depending on the current version and updates needed, Ubuntu may want to update the kernel version, too:

Once the kernel update was done and you are back on the command line, you should reboot your system:

That's it! Now your basic installation of the Raspberry Pi Home Server is done!

The new server does have the host name ubuntu by default.

If you want to change it, have a look at the article Set host name on Ubuntu Server. This step is purely optional and of course you can keep the default host name.

The net-tools package on Ubuntu server includes useful tools for controlling the network subsystem of the Linux system.

When managing your new server without a Desktop being installed, you need to be quite savvy with the Linux command line.

But sometimes, especially if you need to walk through several folders and directories, a file manager becomes useful.

Install an external Hard Drive to your Raspberry Pi

Use cases for your new home server

Now, the basics are done and your new home server is up and running in your home network. But that's only the beginning. You now need to decide about the use cases that you want to implement on your home server. Articles about several use cases are currently in progress and will be published soon.